On human rights, the United States must be a beacon. America is strongest when our policies and actions match our values.More
Home / 2010 / 09 / 02 / Bush Administration Officials Supported Tolerance, Freedom of Religion
September 02, 2010 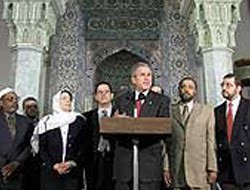 "This new enemy seeks to destroy our freedom and impose its views. We value life; the terrorists ruthlessly destroy it. We value education; the terrorists do not believe women should be educated or should have health care, or should leave their homes. We value the right to speak our minds; for the terrorists, free expression can be grounds for execution. We respect people of all faiths and welcome the free practice of religion; our enemy wants to dictate how to think and how to worship even to their fellow Muslims."

Just two months after the 9/11 attacks, President Bush said those words as he addressed the Nation World Congress Center in Atlanta. In the years since, he and many members of his administration uttered similar sentiments urging Americans to demonstrate tolerance and celebrate the diversity that strengthens America.

Where are they now?

As tensions mount and ripple throughout the nation – from the "Ground Zero mosque" debate in Lower Manhattan to similar controversies in states like Florida, Tennessee, Wisconsin and California – this tradition of tolerance is under attack by some seeking short term, partisan gain. Next week, a Florida church is sponsoring a “Burn a Koran” ceremony to mark the anniversary of 9/11.

We need all our leaders to weigh in and to restate their commitment to the values of tolerance, unity, and understanding.

We've compiled a few of the most striking quotes from the Bush Administration urging tolerance and freedom of religion.

In March 2008, former Secretary of State Condoleezza Rice noted, “Islam is an important and growing part of the American fabric of life. Millions of our fellow citizens are Muslims, worshipping at over 1,200 different mosques across our nation. In addition, the American Muslim community has roots in 80 different countries around the world. Our growing Muslim population is a great and welcome addition to the diversity of our country.”

Just this year, former Secretary for Homeland Security Michael Chertoff wrote in a blog, “Our history of social integration and religious tolerance are important defenses against homegrown terrorists. We should be careful to maintain these traditional values even as we address new efforts by our enemies to establish footholds here at home.”

“The United States is a nation dedicated to religious tolerance and freedom, and President Bush has acted to ensure that the world's Muslims know that America appreciates and celebrates the traditions of Islam.”

"Here in the United States our Muslim citizens are making many contributions in business, science and law, medicine and education, and in other fields. Muslim members of our Armed Forces and of my administration are serving their fellow Americans with distinction, upholding our nation's ideals of liberty and justice in a world at peace."
--Remarks by the President on Eid Al-Fitr The Islamic Center of Washington, D.C. December 5, 2002 (full transcript available here)

"America treasures the relationship we have with our many Muslim friends, and we respect the vibrant faith of Islam which inspires countless individuals to lead lives of honesty, integrity, and morality. This year, may Eid also be a time in which we recognize the values of progress, pluralism, and acceptance that bind us together as a Nation and a global community. By working together to advance mutual understanding, we point the way to a brighter future for all."
--Presidential Message Eid al-Fitr December 5, 2002 (Full transcript available here)

"All Americans must recognize that the face of terror is not the true faith -- face of Islam. Islam is a faith that brings comfort to a billion people around the world. It's a faith that has made brothers and sisters of every race. It's a faith based upon love, not hate."
--President George W. Bush Holds Roundtable with Arab and Muslim-American Leaders Afghanistan Embassy, Washington, D.C. September 10, 2002

“Finally, homegrown terrorism remains a comparatively modest phenomenon in the United States as compared with other countries. That reflects this nation's traditional acceptance of immigrants and ethnic groups as full participants in our society. Our history of social integration and religious tolerance are important defenses against homegrown terrorists. We should be careful to maintain these traditional values even as we address new efforts by our enemies to establish footholds here at home.”
--2010 blog. available here

“Given recent events, I think it’s good to reinforce the message that America values its rich diversity. Muslims in America have long been part of the fabric of our nation. The actions of a few extremists cannot serve as a reflection on the many people who have made valuable contributions to our society. Right here in Los Angeles we work with several Muslim American leaders who are helping us to better secure our country. Muslim Americans, like all Americans are united in our resolve to live in safety and security.”
--Taken from: Written Testimony of Daniel W. Sutherland Officer for Civil Rights and Civil Liberties United States Department of Homeland Security “Threat of Islamic Radicalization to the Homeland,” United States Senate , Committee on Homeland Security and Governmental Affairs, March 14, 2007.

Human Rights First is a premier institution devoted to the noblest of all causes.

Keeping the Door Closed on Torture